What is MERN Stack?

As fast as technology evolves, so too do the expectations and standards of people around the world. Developers are in a constant state of burning the proverbial midnight oil to satisfy users with impeccable experiences. Every day the goal for developers is to render applications that are more responsive and interactive than they were the day before.

To do so, software developers are utilizing advanced technologies called stacks. A technology stack is a list structure of function parameters and calls used in the development process of a software product. The elements making up the full stack are chosen specifically to work in conjunction with one another in creating highly operational software.

Here are the three most commonly used stacks today:

First, in this article, we’ll cover the components of a MERN stack.

To start, MERN is an acronym. Each letter is representative of its four components: MongoDB, Express.js, React.js, Node.js. When combined, the technologies allow users to create a 3-tier architecture (frontend, backend, database) entirely in JavaScript and JavaScript Object Notation (JSON).

Now, let’s dig a little deeper into each element of a MERN stack. 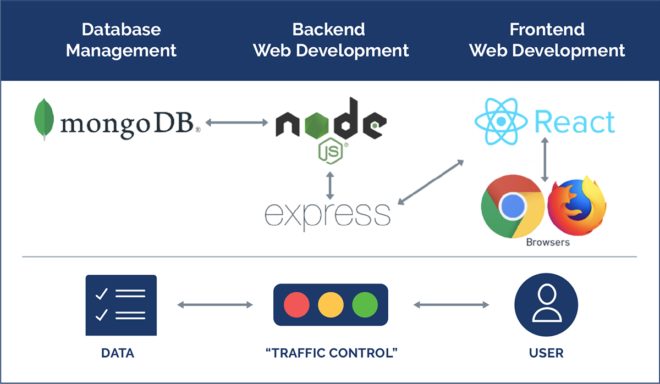 MongoDB is an open-source, cross-platform, no-SQL database used to store the application data. As a document-oriented database, information (content, uploads, events, user profiles, etc.) is stored in collections and documents instead of rows and tables. It’s fast, can handle large data, and is simple to set up.

React.js is the frontend JavaScript library used for developing dynamic client-side applications in HTML. Because React can handle constant data shifting, developers use it to configure UI elements of mobile and single-page applications. The component’s power lies in its ability to govern complex, data-driven interfaces with minimal code.

Node.js is an open-source, cross-platform, JavaScript Runtime Environment. It’s intended to allow users to write code outside the browser, on the server-side. Through the Node Pack Manager, there are thousands of node modules available for download. Node.js users can enjoy incredibly fast code execution because it’s built on Google Chrome’s JavaScript Engine.

MERN stacks operate in a fluid cycle. In the beginning, users interact with React.js UI components housed in the browser. The frontend is served by the web app backend through Express.js, which is running on top of Node.js.

Each interaction causing a data change request is sent to the Node.js-based Express server. Front there, data is pulled from the MongoDB database and returned to the web app’s frontend, where it is presented to the user.

And that’s the power of a MERN stack.

What Do You Think?

You could already be interacting with software built using a MERN stack. Now you could be the person to develop an application using a MERN stack. All it takes is hard work and help from Kenzie Academy. We offer a multitude of courses geared toward teaching you the world of coding. Don’t keep your future waiting any longer, apply today!